As a response to the question, “Why don’t poets just write what they mean?” I’d generally subscribe to Coleridge’s view that prose is “words in their best order” whilst poetry is “the best words in their best order.” There are times when both the choice and sequencing of words lifts the meaning of a line of poetry above that which would have been expressed if a writer had selected ‘plain English’ prose. Another argument, of course, is that the poet did write what they meant – they intended to put those specific words in a specific order in an attempt to make us think or feel a specific way. Oftentimes, once we’ve unravelled the syntax and imagery of a phrase, a line, a stanza of poetry, something sublime emerges.

Despite this attempted defence of poetry, I can’t help but agree, on occasion, with the sentiment of the question. Some poetry is neither the best words, nor the best order. It’s just rubbish. 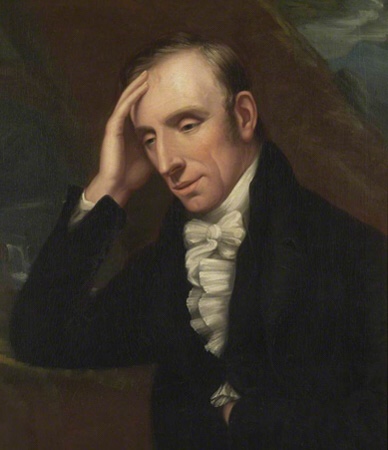 Wordsworth often suffered guilty migraines, resulting from his attempts to mock Coleridge by putting the worst words in the worst order.

Coleridge’s balladeering buddy, Wordsworth, wrote some rubbish, for example. Some real rubbish which would have been better in plain English. Take a look at this seemingly unending and painful sentence from The Prelude:

There are in our existence spots of time,
That with distinct pre-eminence retain
A renovating virtue, whence, depressed
By false opinion and contentious thought,
Or aught of heavier or more deadly weight,
In trivial occupations, and the round
Of ordinary intercourse, our minds
Are nourished and invisibly repaired;
A virtue, by which pleasure is enhanced,
That penetrates, enables us to mount,
When high, more high, and lifts us up when fallen.

There’s something important and true and beautiful in what Wordsworth is arguing here but I’m distracted from it rather than drawn to it by the meandering syntax of the sentence. It’s this kind of over-complication verging on impenetrability which, I suspect, results in a feeling amongst less experienced readers that poetry is this way – relatively dense in syntax but relatively sparse in meaning.

In the same way, I think we are often guilty of over-complicating the process and practice of teaching. The more complication we add to our lessons, the less likely we are to notice misconception, bewilderment, reluctance or a lack of challenge. We can be too busy with the sometimes distracting poetry of teaching to notice these issues. I was reminded of this, when this tweet popped up on my timeline the other day:

This was followed by the creation of the #Nobservation hashtag by Matt Pinkett, through which people shared a range of largely ill-conceived advice, given to them by people who had observed parts of their lessons. There were hundreds of responses and, although it’s difficult to tell whether there is a truth in every single one, the sense of collective relief in being able to share the apparent stupidity of some observers comments was substantial. Quite a number of the comments related to the observer’s desire for more poetic excitement in the lesson.

One of the key frustrations which seemed to emerge in the thread was that people who appeared to know little about the context of a class, a lesson, a subject or a school could be so wrongheaded about something. I’ve been on both sides of this situation before. I know that I’ve made some of the suggestions in the thread to other teachers in years gone by. I’ve also received some of the other advice as a teacher. I’m sure I will look back in ten years’ time and think that some of things I’m currently doing are pretty stupid. We’re all, to our own degrees, imperfect.

When you spend much of your time “judging” the quality of education in your school, which is at least a part of the role of a school leader, it is sometimes easy to lose sight of the large or even small spots in your school where the prose of teaching has a clarity to it – where there is plain teaching.

Something we’ve done over the last few week’s which has been really useful, I hope, is take all of our teachers in small groups, on a walkabout of the school, dropping into lessons  to see what we can pick up from the teaching of others. It’s been a little like a surgeon’s rounds.

On the walkabouts I’ve been on, I’ve seen amongst other things:

The opportunity to walk into lessons with such a wide variety of teachers from different subjects made me look at our school from a different, quite humbling angle. We’ll take feedback from them to see if they felt the same. My suspicion is that many of them will have learnt as much from this as they would from a coaching session and certainly more than from the advice exemplified on the #Nobservation thread.

There are, in our teaching. spots of time in lessons which lift us up, either when we’re higher than we’ve been before or when we’ve fallen to our lowest point. Maybe Wordsworth wasn’t such a nobserver after all.