“What an excellent example of the power of dress, young Oliver Twist was! Wrapped in the blanket which had hitherto formed his only covering, he might have been the child of a nobleman or a beggar; it would have been hard for the haughtiest stranger to have assigned him his proper station in society. But now that he was enveloped in the old calico robes which had grown yellow in the same service, he was badged and ticketed, and fell into his place at once — a parish child — the orphan of a workhouse — the humble, half-starved drudge — to be cuffed and buffeted through the world — despised by all, and pitied by none.” 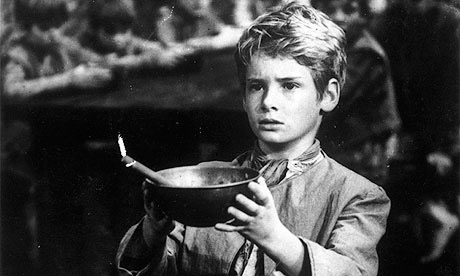 Only a few paragraphs into his novel, Oliver Twist, Dickens establishes his protagonist as being representative of those children who, through the  circumstances of their birth, the state of Victorian society and the treatment of others, were destined to a life of economic, social and cultural poverty.

But our Olivers, our Olivias, our Olgas and our Omars, they’re alright aren’t they? We have higher expectations now. We have more schools than ever before which are judged to be good and outstanding by Ofsted. The government says. Even Sir Michael Wilshaw says – and he definitely has high expectations.

Yet, according to Barnado’s, the British children’s charity, “There are currently 3.7 million children living in poverty in the UK. That’s over a quarter of all children.” Worryingly, on the same page of Barnado’s website, they tell us:

So, at both ends of our system of compulsory schooling, statistically there are still significant educational inequalities. Though many of these children won’t be bound by these statistics, in too many cases the underlying issues affect students as they move through adulthood and linger into old age. Although the numbers are fewer, too many, like Oliver, are still left “badged and ticketed” to fall into their “place” in society.

In their 2013 paper for ASCL, “What is Preventing Social Mobility? A Review of the Evidence,” Francis and Wong identify the following two factors as playing a key roll in generating the attainment and opportunity gaps between advantaged and disadvantaged students in the U.K.

1) The high level of educational and social segregation in our system.

2) The facilitation of those with better financial and social capital to use this to secure advantage for their children.

Captured between these two areas, Francis and Wong list:

Last week, I had the privilege of spending two days training with the Teach Like a Champion team – Doug Lemov, Erica Woolway and Maggie Johnson – as well as welcoming Doug to Swindon Academy, the school where I teach. I remember, on first reading Teach Like a Champion, being seriously impressed by the analysis Doug and his team had carried out in terms of what the most effective teachers in their school systems were doing to secure rapid progress, particularly for students from deprived backgrounds. If you’re unfamiliar with his work, this video is a useful starting point.

When we were beginning to develop our teaching model at Swindon Academy, it struck us that there would be great benefit in having a shared language of teaching which we could use with both staff, during their coaching and CPD sessions, and students during their lessons. We could also see that the strategies tied in exceedingly well with the mastery curriculum model we were moving towards. Most importantly, we agreed with Lemov’s message that the strategies he identifies in the book are a toolkit to draw from, rather than a prescriptive list of methods which must be used robotically and unthinkingly in every lesson. Teachers must, whilst aligning themselves with the vision and ethos of their school, be seen as professional thinkers who make choices about the best strategies to support their students’ to make progress.

I think this also links to what Doug alludes to in this post about school leaders making professional judgements in terms of what’s going to be of greatest benefit to the students of their school at that point on their developmental journey. It’s also why I’m really proud of what Doug says in the video at the end of this post about what he saw happening in our school.

I’ll be writing another post soon about the ways in which we’re looking to weave in the strategies from Reading Reconsidered with the same sense of mission – not one born out of the pity which Dickens suggests people could/should have for Oliver, but rather one based on a belief in the benefits of engaging all of our students – whatever their background – in the richness of the English language and the wonder of English literature.